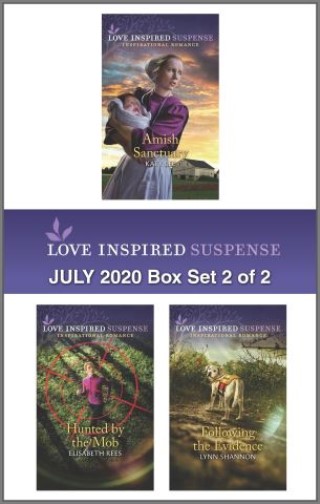 When someone comes after one of her counseling patients, Naomi Kemp promises to shield the woman’s baby. Now with a murderer on her tail, Naomi flees back to the Amish roots—and the ex-fiancé—she left behind. But can Sawyer Zook save her and the child as Naomi faces her traumatic past?

HUNTED BY THE MOB

An assignment turns deadly when FBI agent Goldie Simmons has a bounty placed on her head. Now relying on her long-lost childhood sweetheart, Zeke Miller—the fellow agent originally slated to be her partner on the case—is her only hope of survival as the mafia hunts her down.

Moving to Texas to claim her inheritance is supposed to be a new beginning for widowed single mother Emma Pierce—until someone tries to kill her. But Sheriff Reed Atkinson won’t let anything happen to his first love…especially when he finds out her case may be tied to his sister’s disappearance.

Katy Lee: Katy Lee writes suspenseful romances that thrill and inspire.  She believes every story should stir and satisfy the reader--from the edge of their seat.  A native New Englander, Katy loves to knit warm wooly things.  She enjoys traveling the side-roads and exploring the locals' hideaways.  A homeschooling mom of three competitive swimmers, Katy often writes from the stands while cheering them on.  Visit Katy at: www.KatyLeeBooks.com. Elisabeth was raised as one of four sisters in the idyllic Welsh border town of Hay-on-Wye, where her father was the parish Vicar. She developed a love of romantic literature as a young girl and often dreamed of becoming a writer. After a very unfulfilling career in information technology, Elisabeth began to write for Harlequin Mills and Boon, and now writes full time from her home in West Wales. For more information visit www.elisabethrees.comLynn Shannon writes novels that combine intriguing mysteries with heartfelt romance. Raised in Texas, she believes pecans and Blue Bell ice cream are must-haves for every household. Lynn lives with her husband, two children, an extremely spoiled dog, and a turtle who hibernates half the year. You can find her online at www.lynnshannon.com.